ART AS AN INCENTIVE FOR ACTIVE TRANSPORT 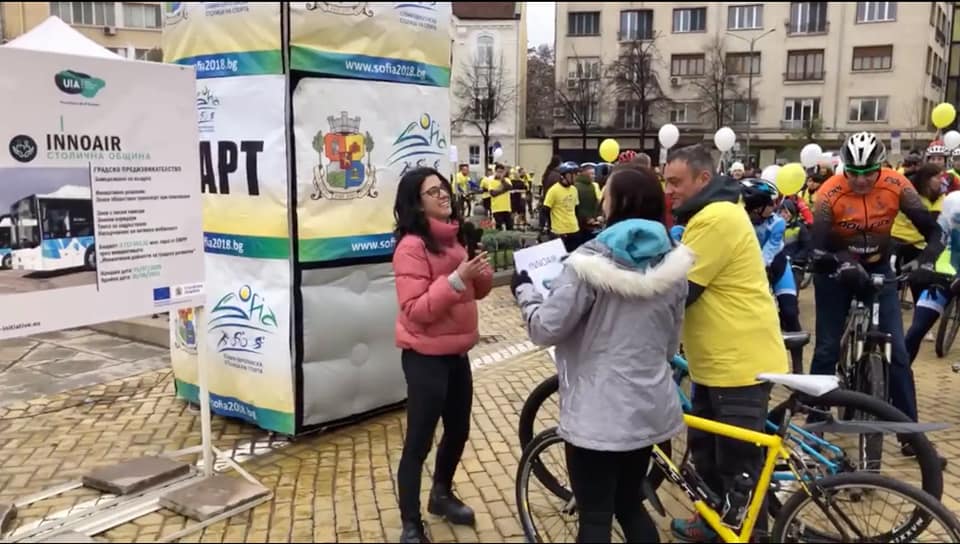 Is a ticket for a concert of opera stars a good incentive to promote active transport in Sofia? The INNOAIR team proves that the answer is “Yes!”.

INNOAIR supports the citizens in the transition to alternative ways of moving around Sofia, resulting in cleaner air and healthier lifestyles. At this year's edition of the traditional bike event "Bike Parade 2021 - Sofia cycles and runs for cleaner air" the INNOAIR project partners provided an unusual and prestigious prize - two free tickets to the Gala of the opera prima Sonya Yoncheva and legend Placido Domingo!

“Be brave, live actively and always be together and in shape! My way to thank you is through music!”, says Sonya Yoncheva, with whose support the award was provided.

The event took place on April 18, 2021 and gathered more than 500 cyclists and more than 120 runners, who enthusiastically waited for the start of the parade and despite the cold weather were determined to show their support for cycling and walking in the city. The award aroused great interest. “Such a prestigious award is very motivating!” shared the participants. “Awards like this build an excellent reputation for cyclists! Well done!” they greeted. The winners expressed their gratitude and admitted that they are looking forward to the gala, which will be held in the heart of Sofia on August 31 this year.

An active, fruitful day with a sequel - an unforgettable experience in touch with the work of world-class stars - INNOAIR made this possible.

INNOAIR project is co-financed by the European Regional Development Fund through the Urban Innovative Actions Initiative.