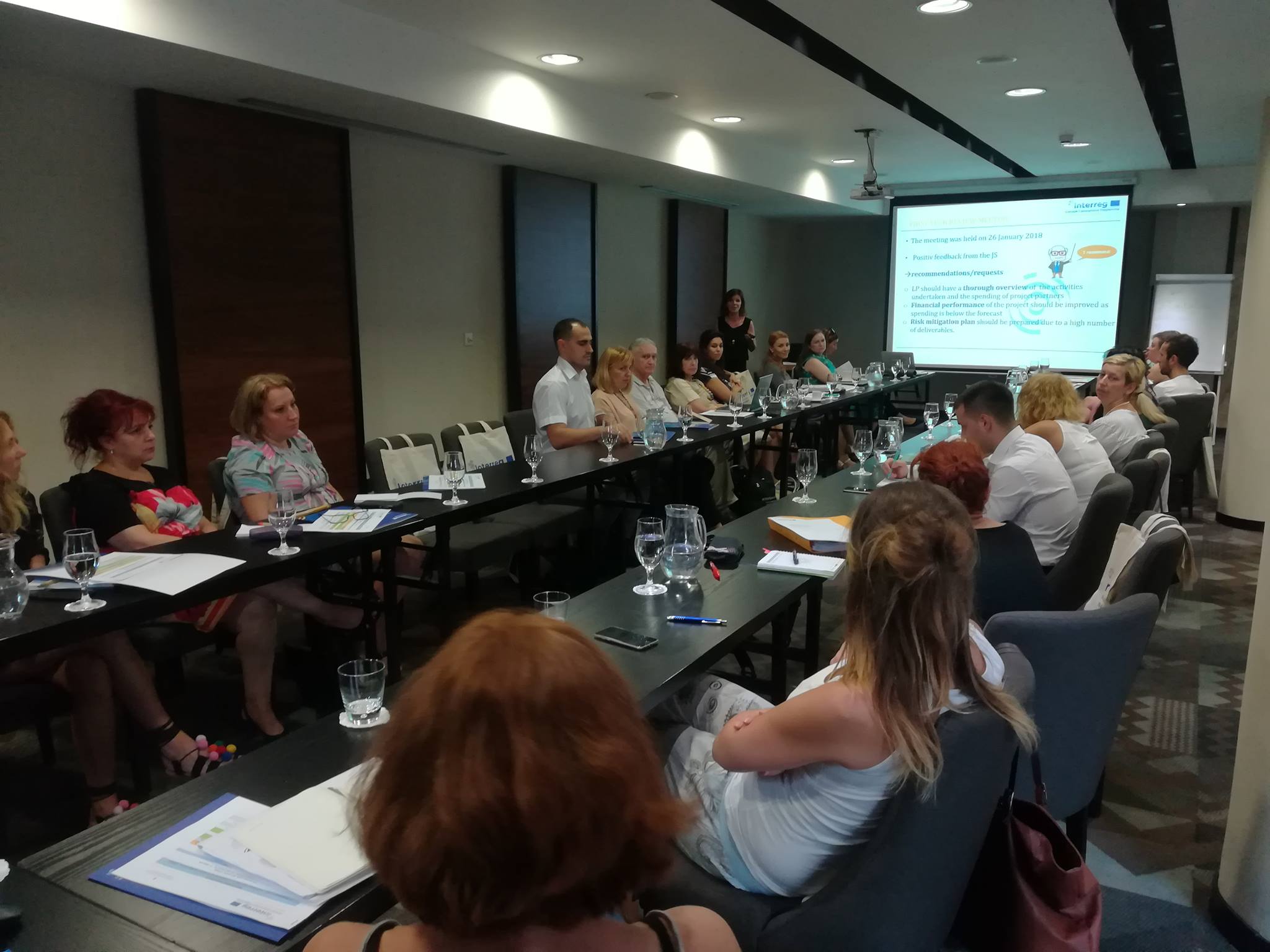 The New Generation Skills project partners met in Belgrade on 13 and 16 of June, 2018, for the third transnational meeting. The 12 partners from 7 countries in the Balkan region – Austria, Bulgaria, Czech Republic, Hungary, Romania, Serbia and Slovenia, discussed and monitored the project progress. Special emphasis was given to discuss the seven local innovation labs: the renovations and refurbishments, the planned activities, ways to attract young people.

Parallel with the meeting, an international youth camp was held with young participants – 15 to 29 year-olds, from the partner cities who worked to develop social innovation ideas addressing societal challenges.

At the end of the meeting a special dissemination event attended by a variety of stakeholders from Belgrade. The experience and lessons learned in the framework of the project regarding social innovation and youth entrepreneurial skills development.

SDA is a project knowledge partner in the NGS project under the Danube Transnational programme, co-founded by the EU funds (ERDF and IPA), http://www.interreg-danube.eu/approved-projects/newgenerationskills.

“Sofia Municipality is the first municipality in Bulgaria to develop, adopt, and currently implement an Innovation Strategy for Smart Specialization of Sofia, The strategy lays out information and communication technologies and creative industries as priorities for the city,” said Mayor of Sofia Ms Yordanka Fandakova at the “Smart Specialization and Technology Transfer as Innovation Drivers for Regional Growth” conference, organized by the Joint Research Center and the European Commission. Taking part in the conference were EU Commissioner Mariya Gabriel, Deputy Prime Minister Tomislav Donchev, and President of the European Committee of the Regions Markku Markkula.

"In the last several years, Sofia Municipality is actively involved in supporting events connected to digital technologies and innovations, such as Webit.Festival and Innovation Explorer, and, in just a few weeks in June, Sofia will again be the host of Webit.Festival Europe. With the cooperation of of EU Commissioner Mariya Gabriel, Sofia will host the Digital Assembly, and as part of which is organizing the Balkan Hackathon,” said Fandakova.

In recent years, Sofia has been developing as the largest Municipal economy, outputting 40% of the country’s GDP, and is continuing to prove itself as an attractive place for investment.

Information technologies are among the fastest growing industries in Sofia. They comprise 5,7% of the economy and generate a growing part of Bulgaria’s exports. The IT sector employs 40 400 workers in Sofia, one third of whom are women.

Over 100 IT companies are currently working in Sofia, additionally developing highly qualified specialists. One of the primary stimuli for new investors in the capitol is a well-prepared work force, with over 50% of the active population carrying a university degree.

The Mayor also noted that Sofia is the first municipality in Bulgaria undertaking the process of opening its data. With the support of programme “Europe” and the cooperation of Sofia Development Association, an open data platform is developed, starting with the publication of the summary budget of Sofia Municipality, as well as the projects under programme “Culture” and public procurements. Currently, Sofia Municipality maintains 27 open datasets. 2018 forsees the opening of 23 more.

In addition, the city is developing free public WiFi zones, including in public transport. The Sofia Metro has full free WiFi coverage. Sofia Municipality is also applying as part of project WiFi4EU for financing and assisting the installment of public WiFi hotspots.

"Sofia is among the coordinators of the Urban Agenda for the EU, in which the EC and multiple European cities are in direct partnership. Sofia is coodrinator of the Digital Transition partnership along with Estonia and Oulu, Finland. The aim of the partnership is to identify and propose new measures and solutions for improving EU legislation, financing municipal policies and education programs for making a smooth digital transition in Europe,” added Fandakova. 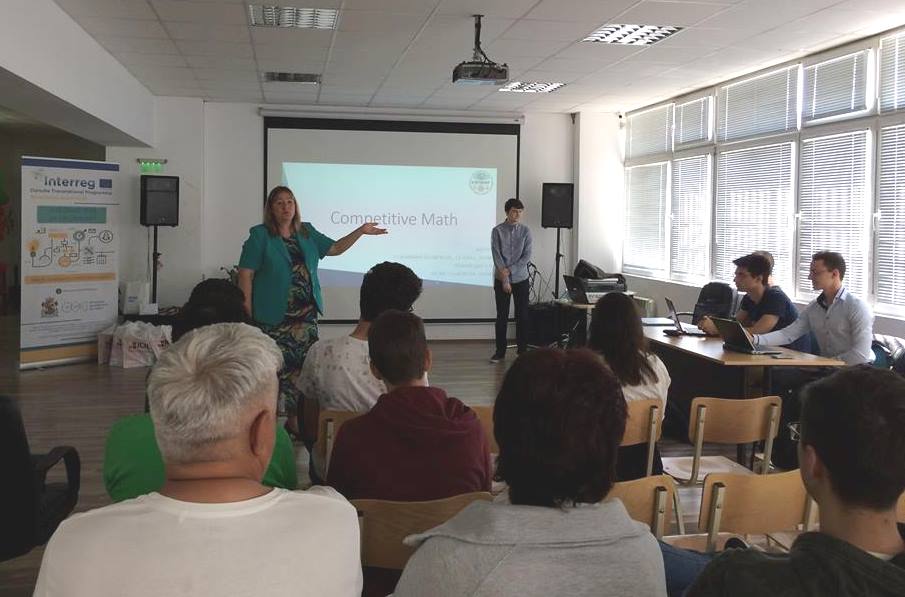 Sofia Development Association was a partner of the mobile app competition APPS@NSMNS, held for the third consecutive year at the National High School of Mathematics and Natural Science “Academician Lyubomir Chakalov.” The competition was part of the school’s Festival of the Sciences on April 28 and 29, 2018, as well as one of the events under the project “New Generation Skills,” co-funded by Interreg Danube. The participants at the Hackathon were informed about the upcoming unveiling of the Youth Innovation Lab and the services it will make available to young entrepreneurs.

The competition brough together 5 teams of students from 8 to 12 grade. They each developed a proprietary product under the mentorship of professionals, teachers, researchers, and others. The projects were complete and well-designed mobile apps.

This year’s winners were:
I place – Boyana Nikolova and Kristiyan Serafimov – project GroundHall – from NSMNS – Sofia – the project is a social platform for aiding school.

II place – Stanimir Velichkov – project Competitive Math – from NSMNS – Sofia – The app is a mathematics game that includes its own social network where individual users can share and solve the problems together.

IV place – Kardam Gergov – project Fruits – 134 School – Sofia – The app is targeted at students up to the age of 9 learning English. Users learn the pronounciation and spelling of commonly found fruits and vegetables using two types of games. 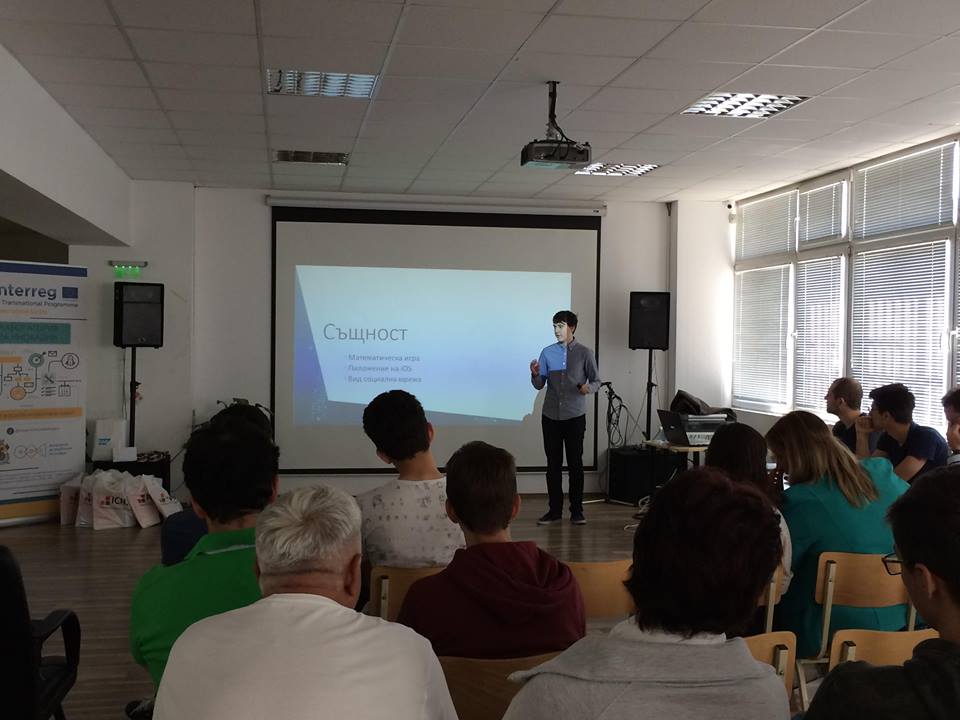 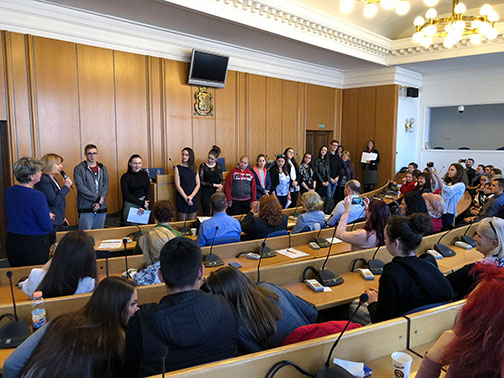 During the award ceremony in competitions for youth initiatives “Youth World and Volunteering" and "Our School Sports Holiday", hosted by Irena Dimitrova, Sport&Youth Direction in Sofia in the presence of Sofia Mayor Yordanka Fandakova and more than 70 students from Sofia schools and their teachers, we briefed the participants on the New Generations Skills project actualities.

They were among the first to learn that the Sofia Youth Innovation Lab is to be set in couple of months and that in April the Dynamic Learning Training Program will be announced and open for applications.

We believe the young people who already started developing winning project ideas we were with will be among the entrepreneurs that will make the Sofia Lab alive and kicking.