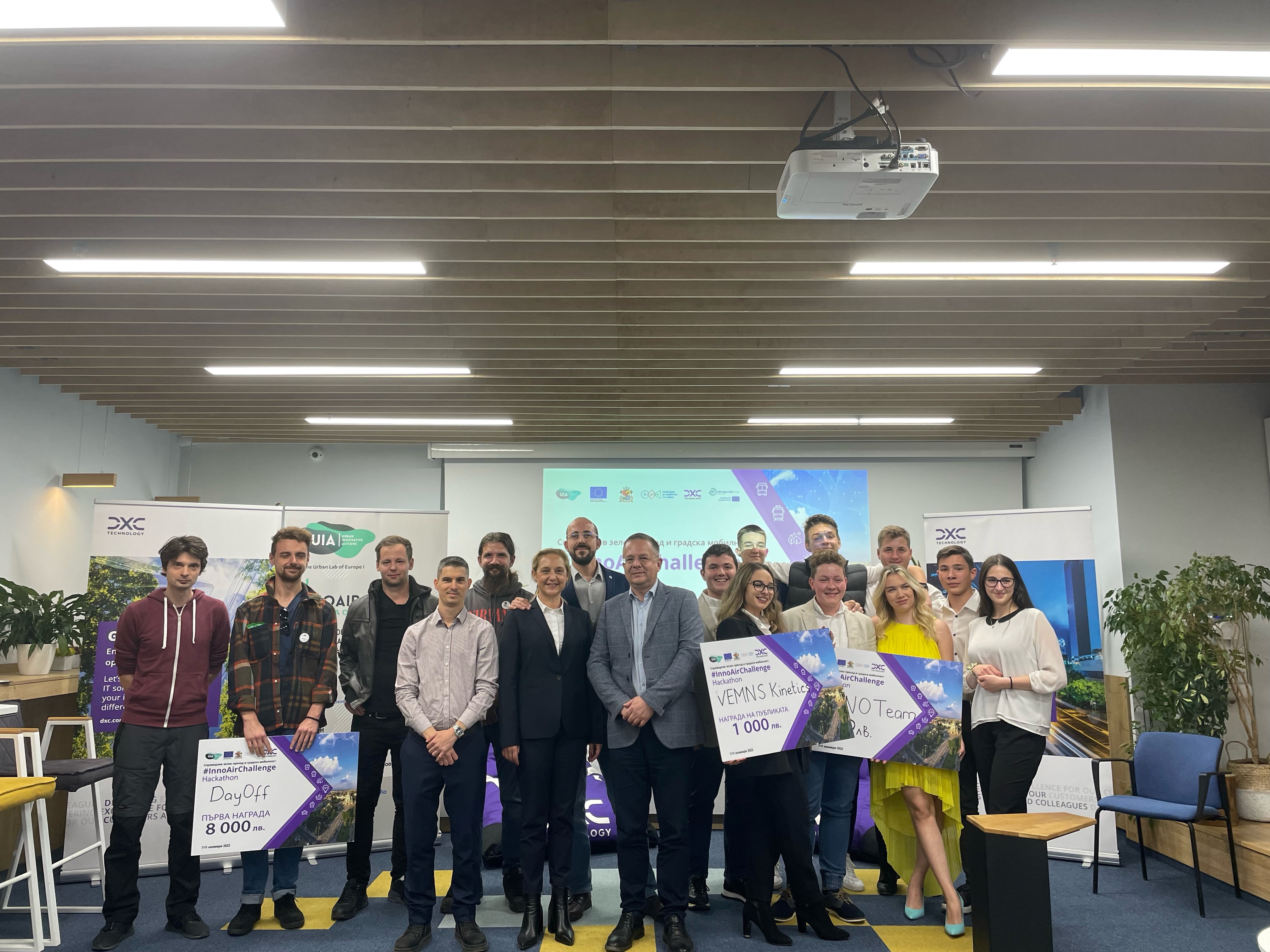 Today, November 11th, the finale of the hackathon “InnoAirChallenge: Just Green transition and Urban Mobility” took place. The event brought together experts, business representatives, local authorities and scientific circles together with teams from all over the country and Europe. The purpose of the event, opened by Gencho Kerezov, Deputy Mayor for Digitalization of Sofia Municipality, and Maria Sharkova, Director of DXC Technology, was to develop and present bold technological solutions for the green transition in the field of urban mobility in Sofia.

The hackathon takes place thanks to a partnership between the Sofia Development Association (ARS), Sofia Municipality and DXC Technology. The final was held at the Launchee hub. The initiative started at the beginning of the week with 25 teams from 9 cities and 3 countries, of which 15 advanced to the final stage of the competition and had the opportunity to present their projects to the jury and the public.

Participants were people from all over Bulgaria, of different ages and with different professional interests, and the competition was supplemented by a team from the United Kingdom. The main challenges that the teams had to face were related to four main themes:
• mobility as a service;
• the next generation of public transport stops and routes;
• facilitated parking and use of a parking space;
• the need to involve citizens in making transport decisions.

In the days before the final, the participants had the opportunity to discuss their ideas with various expert mentors in the field of information technology, urban mobility, green transition and smart technologies.

On the final day, the teams were judged by an expert jury with representatives of the Development Association of Sofia, DXC Technology, Sofia Municipality, Sofia University “St. Kliment Ohridski”, the Center for Urban Mobility, the National Association of Municipalities in Bulgaria and the Regional Hub of the European Institute of Technologies “KIK Klimat”. The dean of the Faculty of Economics and Business Administration, Assoc. Dr. Atanas Georgiev, was also part of the jury.

They evaluated the projects based on the following criteria:
• feasibility of the project;
• content;
• technical implementation;
• presentation and defense.

Team DayOff won the first place in the hackathon with their idea “ParkIt”, which uses trained artificial intelligence to make parking easier in real time by calculating parking spaces using already installed CGM cameras on the streets. The second place was awarded to G-Force with their idea for a Sofia Commute mobile application for purchasing and recharging tickets and cards for public transport with the ability to integrate with existing municipality and CGM systems. The jury awarded the third place to team 1D with an idea for a platform with interactive maps that reflects the urban experience for pedestrians using public transport to improve the adjacent infrastructure.

The prize fund for the first three teams, which has a total value of BGN 15,000, was provided by DXC Technology. The Audience Award, provided by the Sofia Development Association, awarded through a vote of more than 1,230 people online, went to the student team VEMNS Kinetics, which proposed a kinetic tile prototype that, under pressure, produces electricity by using an electromagnetic generator, and the energy produced can be stored in a battery or used for transport.

The Association for Development of Sofia also gave an incentive award in the amount of BGN 500 to the Chaika app team from Burgas for an application for accessing culture and choosing routes for people with motor disabilities. DXC Technology also provided an incentive prize of BGN 500 to the RANO student team for the InSofia application, a collection of information about the city – services, bicycle routes, places with repairs, traffic jams, which can be submitted by citizens or collected by city institutions. The awards were presented by Doncho Barbalov, Deputy Mayor for Finance and Healthcare of the Metropolitan Municipality, and representatives of DXC Technology.

If you want like to watch the full finale of the hackathon “InnoAirChallenge: Just Green transition and Urban Mobility” and get to know all the projects in detail, you can do it HERE.

The hackathon is part of a series within the INNOAIR project, funded by the European initiative Urban Innovative Actions. Sofia is the first Bulgarian city to be selected and become part of the community of innovative European cities. It is also part of the program of the Regional Hub of the European Institute for Innovation and Technology CIC Climate. 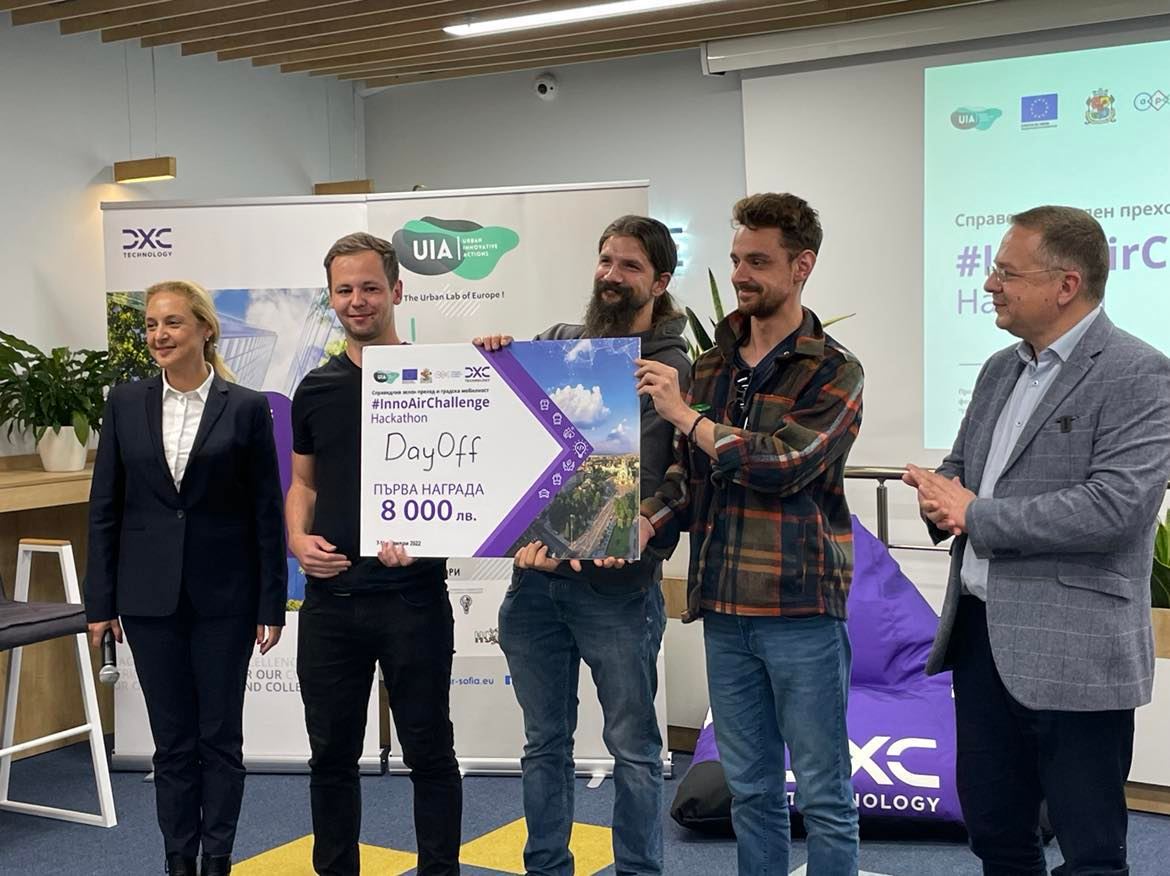 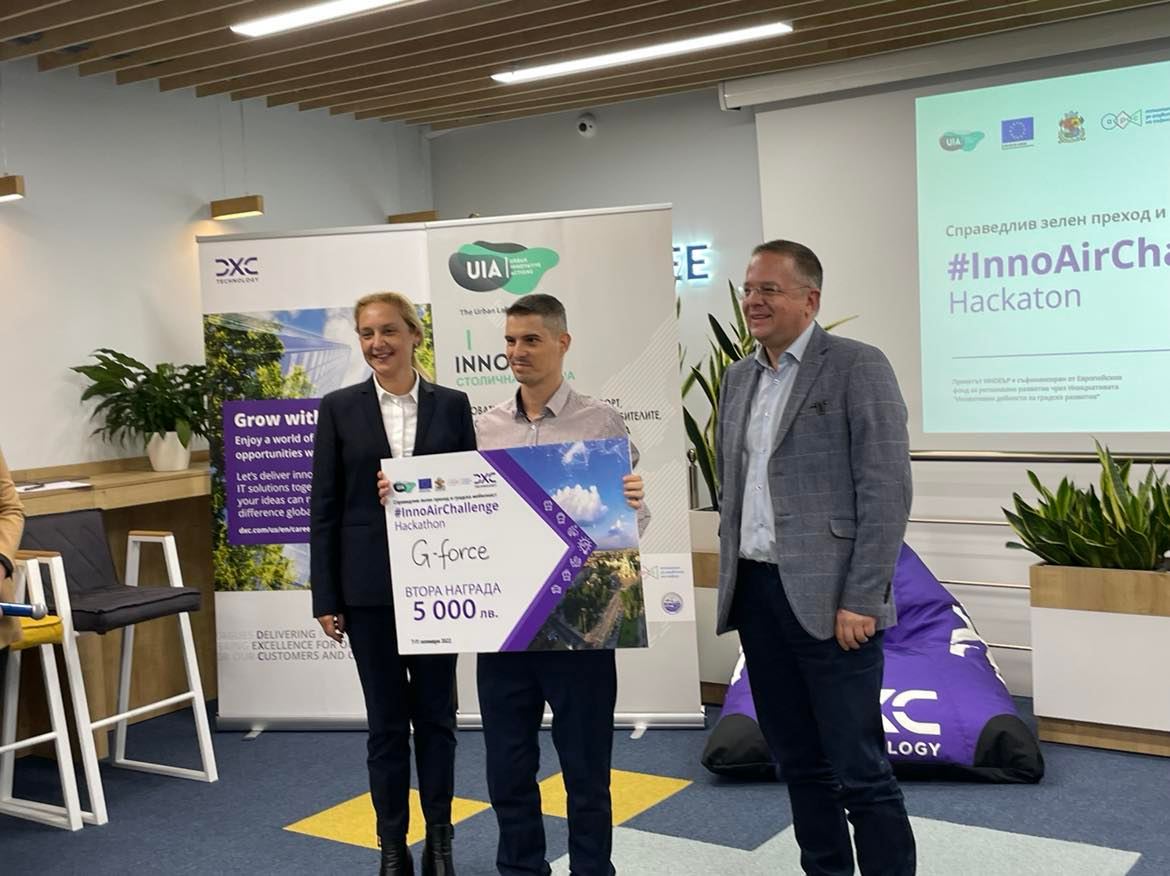 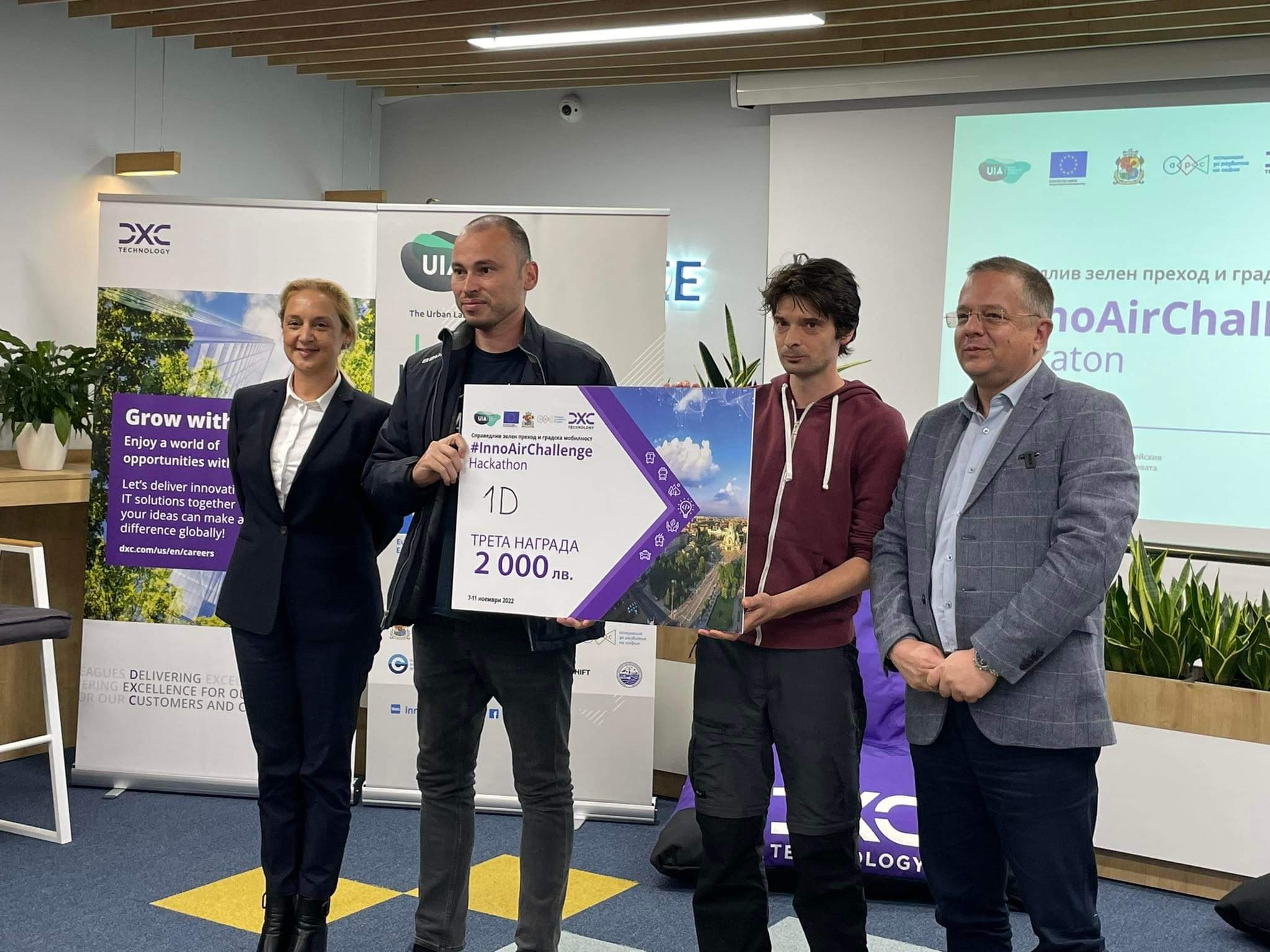 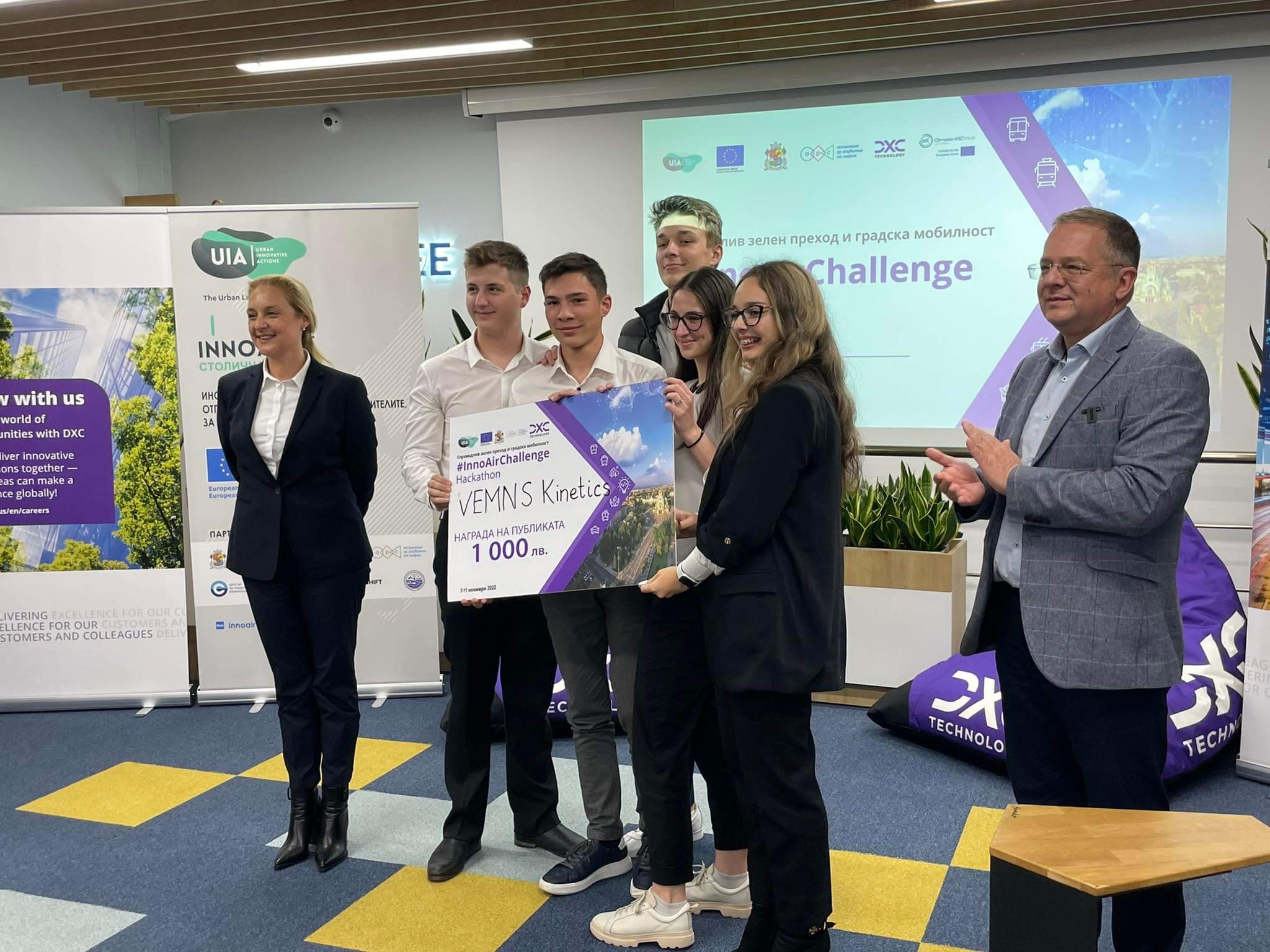 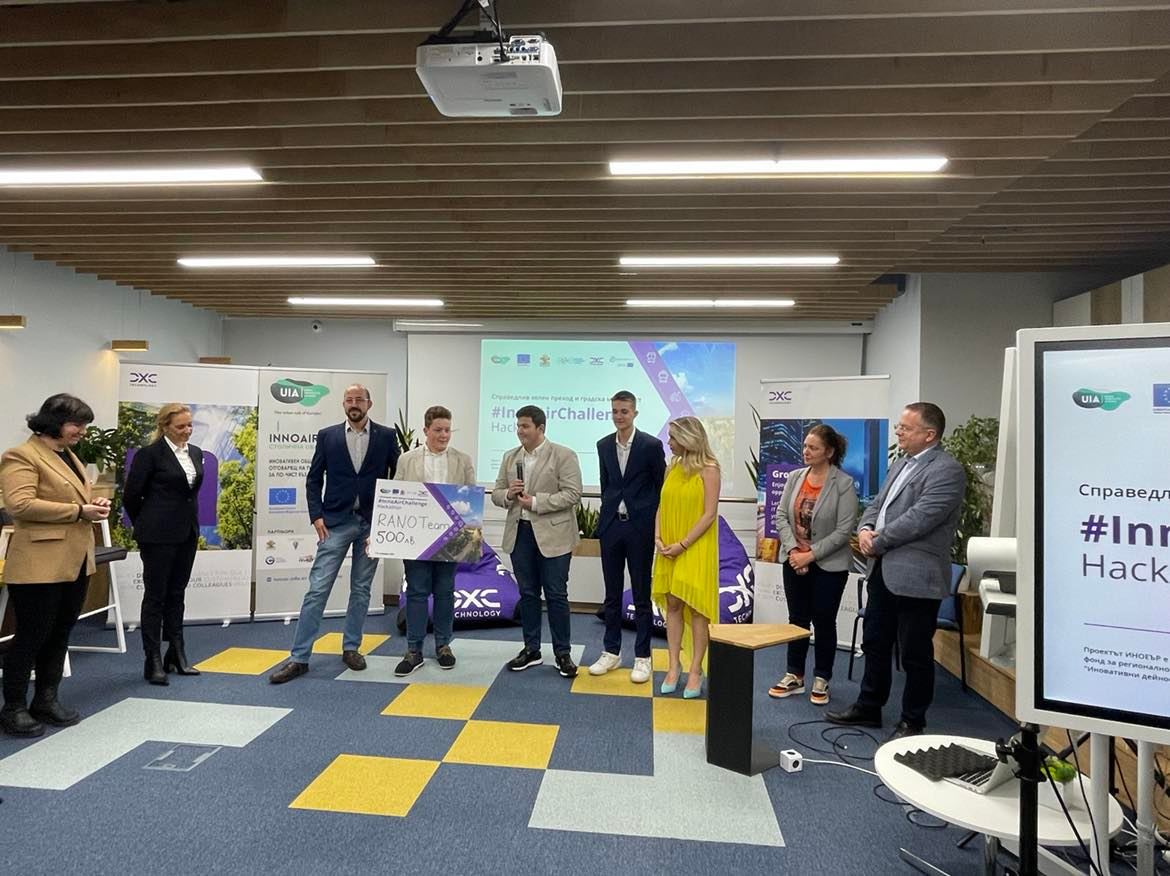 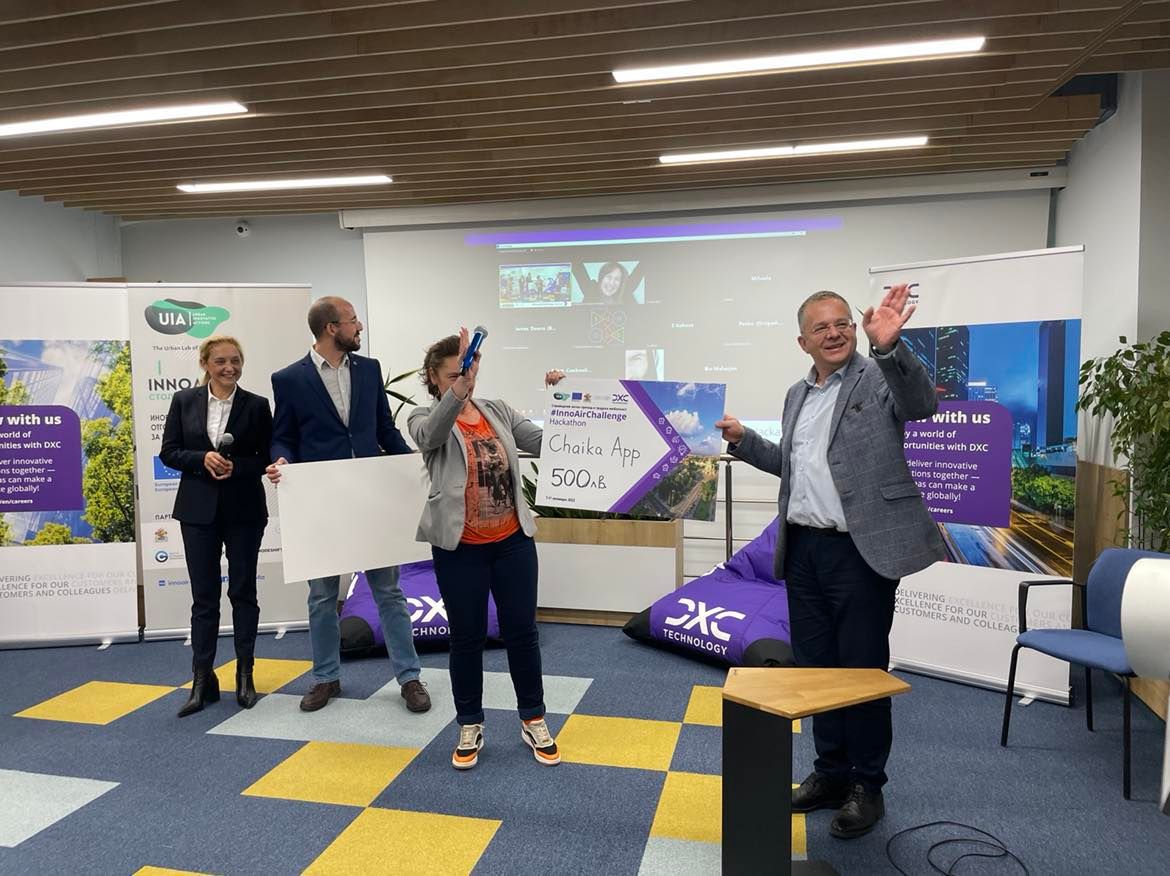 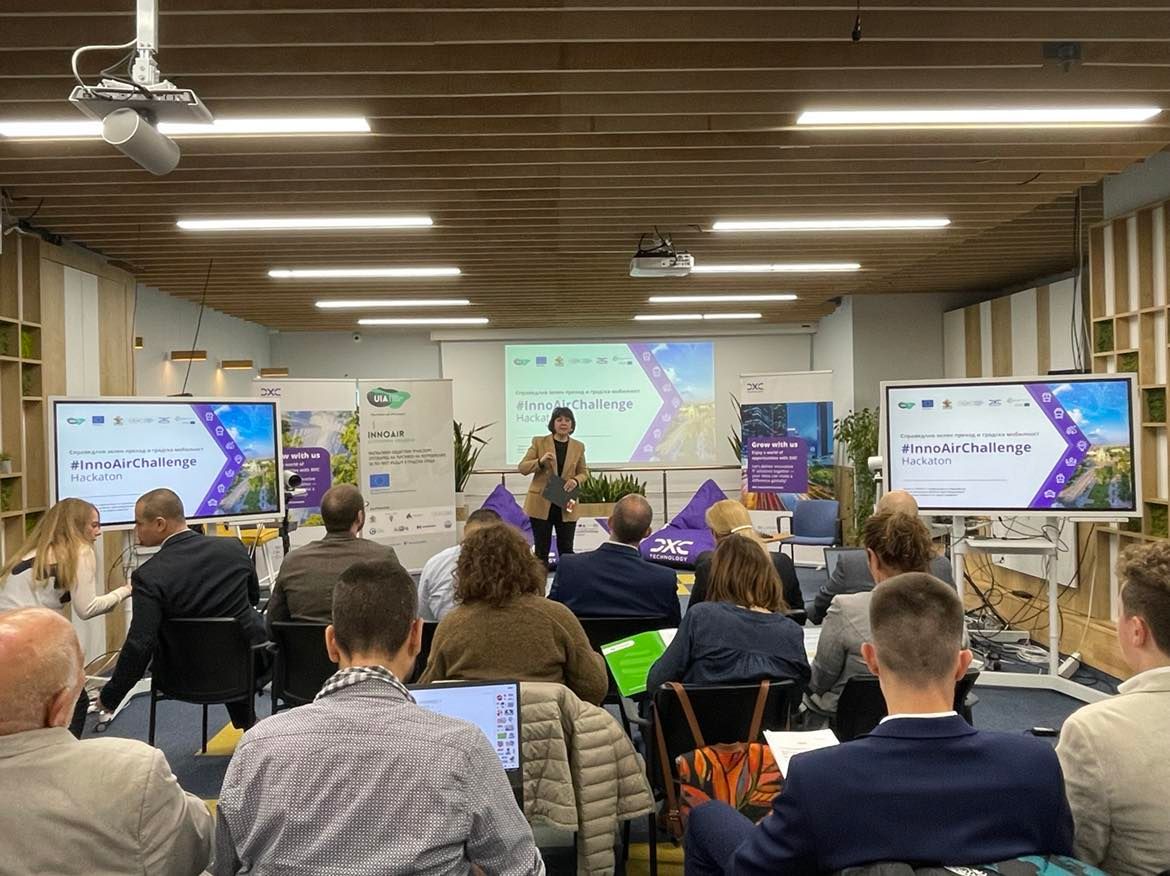 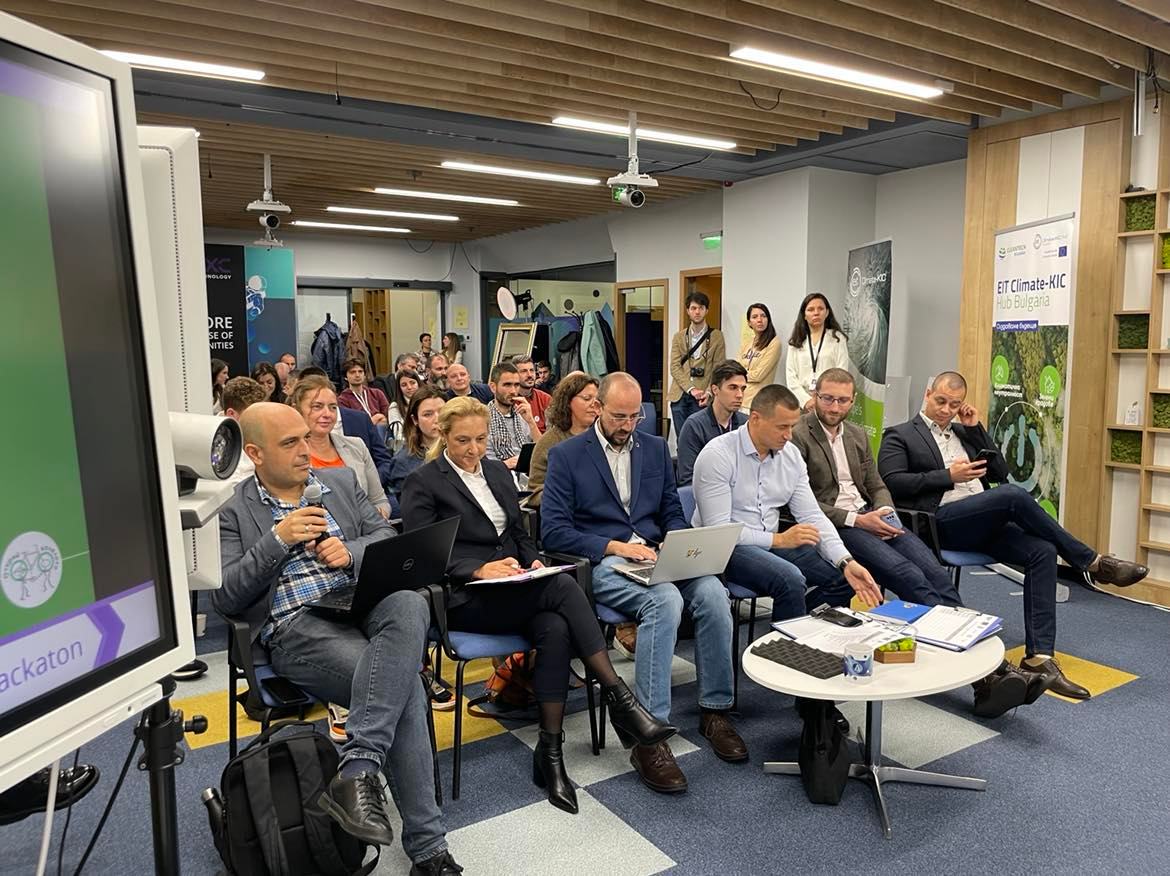